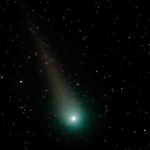 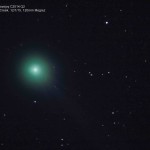 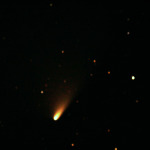 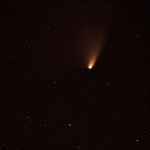 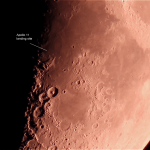 Crater Theophilus, Waxing Crescent Moon, 30% Image taken at Roberts Creek, 23rd May, 2015 Megrez 120mm, DSLR, stack of 100 images, Registax 6.0 Crater named after Greek astronomer who was the Bishop of Alexandria from 385 AD. This is a large crater at the edge of Mare Nectaris, 100km dia. The terminator line was close by at the time, running along the Rupes Altai creating interesting vistas. The crater is located about 400 km south of the Apollo 11 landing site. 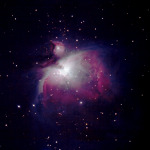 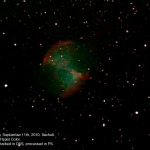 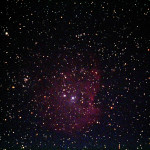 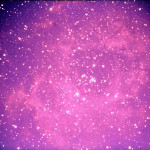 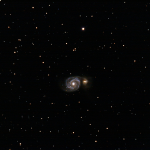 M51, imaged from Roberts Creek on June 8th 2015 with a Megrez 120mm, Canon 60Da, 189 mins total exposures at 1600 ISO. Messier 51 (the Whirlpool galaxy or NGC 5194) is a spiral galaxy in the constellation Canes Venatici, Mag. 8.4. It was the first galaxy to be classified as a spiral galaxy. It was discovered in1773 by Charles Messier. The image includes Messier 51's companion galaxy, NGC 5195. It has been theorized that the two galaxies are connected or colliding, but it is now generally recognized that they are two separate and distinct galaxies. However, it is believed that the prominent spiral structure of Messier 51 is due to its gravitational interaction with NGC 5195.

Messier 81 and 82 imaged on 30th May 2015, Roberts Creek Scope: Megrez 132 mm, Camera: Hά modified Canon 60D, Exposure: 180 minutes total at ISO 800. M81 is a spiral galaxy about 12 million ly away in Ursa Major. It is also known as Bode's Galaxy after its original discoverer, Johan Bode. The galaxy contains a super-massive black hole. M82 is a starburst galaxy at a similar distance, its appearance has led to it often being called the Cigar Galaxy. M82 has an irregular, distorted disk due to the gravitational interaction of its larger neighbor M81. The two galaxies are 150,000 ly apart. 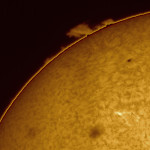 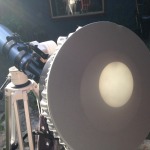 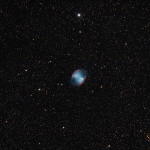 The Dumbbell Nebula imaged from Roberts Creek on Sept. 11th 2015 with a Megrez 120mm, Canon 60Da, 160 mins total exposures at 1600 ISO. The Dumbbell Nebula (M27) is a planetary nebula in the constellation Vulpecula, at a distance of about 1,360 light years, Magnitude is 7.3. This object was the first planetary nebula to be discovered; by Charles Messier in 1764. The nebula was formed when an evolved, red giant star ejected its outer envelope near the end of its lifetime. The expanding cloud of gas became visible once the hot core of the star, visible near the center, was exposed and the high-energy, ultraviolet light from the core ionized the cloud. This how our Sun will end its days when the nuclear fusion stops in its core. It is about 1000 light-years away. 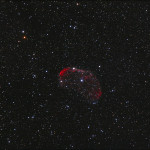 The Crescent Nebula imaged from Roberts Creek on Sept. 9th 2015 with a Megrez 120mm, Canon 60Da, 134 mins total exposures at 4-800 ISO. The Crescent Nebula (NGC6888) is an emission nebula in Cygnus, discovered by Friedrich Wilhelm Herschel in 1792. It is a cosmic bubble about 25 light-years across, Mag 10.0. The nebula is a shell of gas that is being energized by the strong stellar wind from the Wolf-Rayet star (WR 136), the bright star at the center of the nebula. Wolf-Rayet stars are very hot, massive stars that are blowing off their outer layers. The Crescent is about 5,000 light-years away. 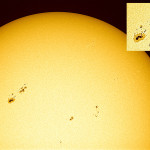 Sunspot AR2422 taken on September 26th from Roberts Creek with an ED80, Baader wedge and PGR Chameleon camera. Stack of 315 images in Registax 6 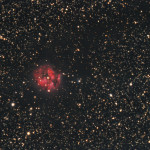 The Cocoon Nebula imaged from Roberts Creek on Nov. 19th 2015 with a Megrez 120mm, Canon 60Da, 187 mins total exposures at 1600 ISO. The Cocoon Nebula ((IC 5146) is a reflection]/emission nebula in the constellation Cygnus. The NGC description refers to IC 5146 as a cluster of 9.5 mag stars involved in a bright and dark nebulaI. It is located near the naked-eye star Pi Cygni, the open cluster NGC 7209 in Lacerta, and the bright open cluster M39. The cluster is about 4,000 ly away, and the central star that lights it formed about 100,000 years ago; the nebula is about 12 arcmins across, which is equivalent to a span of 15 light years. When viewing IC 5146, dark nebula Barnard 168 (B168) is an inseparable part of the experience, forming a dark lane that surrounds the cluster and projects westward forming the appearance of a trail behind the Cocoon. This is clearly visible in this image. 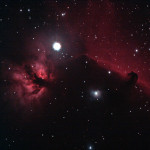 This image of the Horsehead and Flame Nebulae imaged from Roberts Creek on Jan. 14/15th 2016 with a Megrez 120mm, Canon 60Da, 47 mins total exposures at 1600 ISO through an Astronomik UHC filter. This image includes a total of four nebulae at a distance of 1,500 light-years, all related to the large stellar nursery in Orion that includes the Great Nebula M42. The largest nebula in this group is the deep red emission nebula IC 434, appearing as a waterfall of ionized hydrogen at the right side of the image. An intervening cloud of interstellar dust creates the silhouette of a horse’s head, giving rise to the name of the dark nebula B33. The Flame Nebula, also known as NGC 2024 is at the left, this is another emission nebula, a region of glowing hydrogen gas in the shape of a burning bush. Between the Flame and the Horsehead is the smaller blue reflection nebula NGC 2023, caused by a cloud of fine dust reflecting the light of a central star. The brilliant blue star in the upper part of the image is the second magnitude star Alnitak, better known as the left-side star in the belt of Orion, the Hunter.